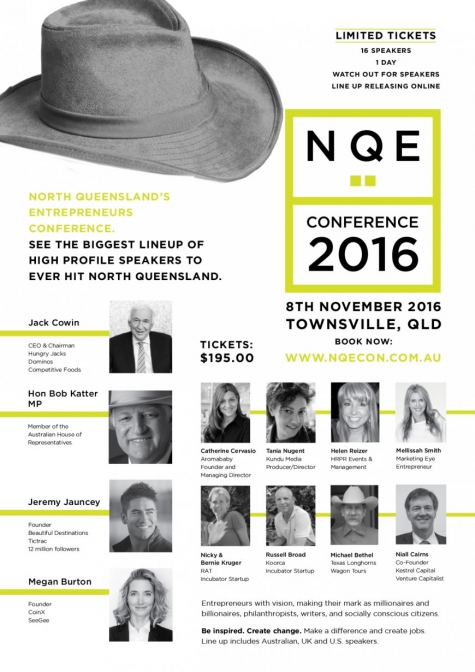 Charters Towers has the biggest contingent of speakers in the line-up for the North Queensland Entrepreneurs Conference to be held in Townsville on November 8, 2016.

As Townsville plays host, the Mayor, Jenny Hill will join Mayor Ramon Jayo and Mayor Chris Loft in a facilitated discussion on innovation in rural and regional areas in Queensland, with JESI and iNQ Joe Hoolahan providing the facilitation of the discussion.


This will be a highlight of the conference, and an opportunity for ideas to be generated, shared and regions to be promoted.

Charters Towers of course is front and centre. With Michael Bethel, one of North Queensland's most successful and known tourism operators with his business Texas Longhorn Wagon Tours where tourists come from all over the world to see, along with media outlets such as Hamish and Andy sending their big guns in to cover this amazing tourism destination - his secret ingredients to success will be shared.

He also has an 18 month waiting list on saddles - amazing!

Then there are the startups who are getting their businesses off the ground. Who would have thought out of The World Incubator, there would have been two technology plays? Russell Broad with his new business Koorca is almost ready to launch its APP in the field of personal security. Bernie Kruger will also be ready early next year to launch his agriculture APP technology play, Rural Australia Technologies (RAT). His wife, who has helped immensely with supporting this initiative also has her own business that is doing well, but will certainly take a huge leap in the next 12 months with Kumbucha "Luv Your Guts" drinks. I've tasted them myself and I would seriously drink them all day long. Jodie Pollock is a phenomenal woman and has been making jams and sauces. She is selling quite a lot and I am sure most of the big guys in this space would be envious. Now it's time to spread her brand nationally and internationally. These steps take a lot of work and a little more time, but they will see all four companies taking their brands and businesses to the next level. Hearing their stories will show others just what is involved in a startup and a few lessons they have learned along the way.

The lineup is very impressive:

Keynote speaker: Jack Cowin, billionaire fast food king who owns Hungry Jacks and is the majority shareholder of Dominos Pizza. He is also on the board for Fairfax.


Someone said to me the other day, "a business man as successful as Jack Cowin has never spoken in Townsville before". What an amazing opportunity for people in all of North Queensland to see up close a man who really epitomises the success of an idea through to building a big empire.

Megan Burton, a serial tech entrepreneur, is coming from Atlanta (30 hour flight each way with stopovers) for just 48 hours, to be a keynote speaker. She has sponsored her trip as her "giving back" to communities and sharing her inspiring story to help others think about entrepreneurship and see what is possible. Her determination and ability to use her brain to build serious businesses will encourage men and women to think big.

Of course, I too will be speaking. I grew up in Townsville for a couple of years, but mostly in Charters Towers. Having grown an international business and also expanded my business interests into developing technology for both my sector and other sectors. I also have developed other business lines and continue to innovate. Growing up in North Queensland was my big advantage and having good manners and finishing everything I started is a life saver in business and in life.

You can build a business from wherever you a located and sell to the world. We live in that age. Open your minds, and look for opportunities and explore your own ideas.

Book your tickets to North Queensland Entrepreneurs Conference on www.nqecon.com.au