The World Incubator became even more disruptive after #NQECon2016 - here's why 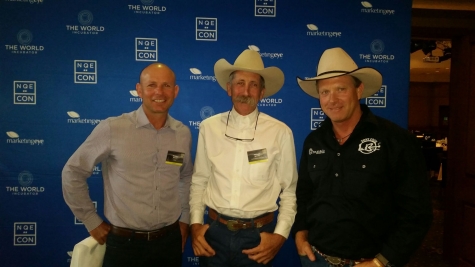 The number 8 is my lucky number, and yet again it proved to be exactly that with the North Queensland Entrepreneurs Conference in Townsville on November 8, 2016.

I had three days to play with dates that could fit into Jack Cowin, the keynote speakers diary, so I chose the date that is "lucky".

From the moment I woke up at 4am in the morning through to the end of the day, when I lay my head on the pillow of The Ville in Townsville, luck went my way.


A full house with many last minute RSVP's helped. A competent team of people who work for Marketing Eye ensuring that I personally had nothing at all to worry about, and a team of people who helped by supporting the event. In particular, Joe Hoolahan from iNQ and JESI who was my 'on the ground' champion for the event, Renee who works in marketing at JESI, Graham Jackson from Loloma Jewellers who asked his friends to help promote the event and one of my first bosses Alex McCormick, who is the best advertising man in North Queensland, more capable and honorable than anyone else I have ever met in the industry. I was lucky, I learned from the best.

Another standout who help us enormously and I ask that you support them, is North Queensland Audio Visual. Darryl and his team were phenomenal on every level.

All of the attendees are in business, so that means they could potentially put on conferences and draw people to the region. Something to think about. There were also a bunch of school kids who didn't seem too bored with the speakers and some of whom came up to me throughout the day with business ideas. That's where it all starts. I was proud as a punch having them there.

How the day started

The day started with my introduction. The conference was for North Queensland and aimed to inspire everyone to take responsibility for the unemployment situation in rural and regional Australia.

By inspiring people and giving them examples of how others changed their own outcomes by being entrepreneurs, people in the room were inspired. I have had more than 150 messages since the conference from people saying they were inspired, many of whom are ready to start businesses or make changes in the one that they work in right now.

My proudest moment were the entrepreneurs from Charters Towers. They really showcased what is possible. From Michael Bethel and his story giving many people in the audience a chuckle, to Tony Cook and his country music who had us all tapping our toes - everyone knew that this conference was about the people in Charters Towers giving it a go.

Russell Broad became an internet sensation with his APP and was in high demand for interviews. Jodie Pollock got a big order from Jack Cowin. Nicky Kruger is being set up with a large distributor for her Luv Ya Guts Kombucha and her husband Bernie had the ears of a big time venture capitalist in Niall Cairns.

This was possible because each of these people believed in themselves and their dreams. They took the first step and let nothing stand in their way. They blocked out the noise, and forged ahead knowing that their dreams were within reach.

25.833 people have viewed just online Russell Broad's interview with Channel 7, with an additional 278 likes and 61 comments. It was also on the nightly news. How amazing was that! He also has starred in the Townsville Bulletin, North Queensland Register and Country Life as well as Marketing Eye Magazine distributed in Australia and in America. His APP will be enormously successful. You must check out what he is about to release. If he ever is looking for investors, my hand is up!

Jodie Pollock is beautiful. I cannot speak more highly of her. While she couldn't be in the incubator each day as she is cooking products and lives on the land, we are there to support her for her entire journey. She had a display and sold some of her products to people at the conference. Her biggest sale though was to Jack Cowin, the keynote speaker. Let's see where that one takes her.

Rural Australia Technologies is about to explode and the humble Bernie Kruger in his normal style talks it down, but when venture capitalist Niall Cairns asked if he could contact him, we knew that something big was about to happen. Watch this space.

What can I say about Nicky Kruger? This woman is everything any woman would want to be; a good mother, a great wife, healthy, kind, giving, supportive and an entrepreneur in the making. Her Luv Ya Guts Kombucha tastes delicious and after seeing one just like it that doesn't taste as good in Whole Foods, I realised that she really is onto something. Once again, hooking her up with a distributor is the next step and we have one in mind.

The speakers were the stars who made everything possible. I will write another blog sharing their pearls of wisdom, but take this opportunity to thank them for their time, efforts, and presentations.